In my initial blog entry on the Dunbar Number I presented some statistics on group sizes based on the online game Ultimata Online. In it you could clearly see the power-law (pareto) curve, with diminishing returns at around 150, with most groups being 60 in size: 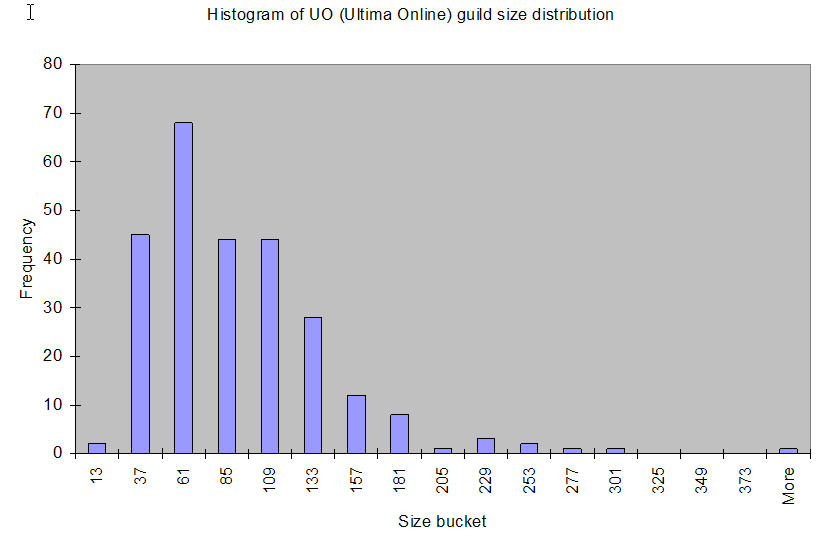 More recently, Nick Yee and other researchers at the PlayOn Blog have been researching the behaviors of players in the popular World of Warcraft online game. At my request, they sampled guild sizes over a one-week period, and prepared similar graphs (now 404, use internet archive link):

Overall, these statistics still support my original hypothesis in my Dunbar Number post that mean group sizes will be smaller than 150 for non-survival oriented groups:

Interestingly, the diminishing returns for large groups in World of Warcraft appear to cut off much sooner then they do in Ultima Online, with the 95th percentile 54 and the 99th percentile being 110. When I asked about why the 'knee' was much closer to 50 rather than Ultima Online's knee around 150, Raph Koster (the game designer who gave me the original Ultima Online data) answered that it might be because Ultima Online used a "veteran member" method of counting. This could result in under reporting of new users and thus pushing up sizes of more established groups.

Also different was the fact that the World of Warcraft guild sizes display a reverse power-law, with the smallest groups being much more common, rather then the bell curve of Ultima Online. If one-person guilds are excluded, the average guild size was 16.8, the median was 9. This seems to correspond much closer to my thoughts on a smaller 'nodal' threshold for group size that I've observed at around 15, which I describe in Dunbar, Altruistic Punishment, and Meta-Moderation.

My guess is that there is something about Worlds of Warcraft such that even participating in very small groups can be useful, whereas for Ultima Online the utility is gained mainly by sharing the resources earned by larger groups. Thus Worlds of Warcraft has groups that are "bands" as well as "tribes", while with Ultima Online groups are more llikely to be just "tribes".

I've not had time to play Worlds of Warcraft yet, so I'm curious if those who have more experience would agree with my hypothesis.