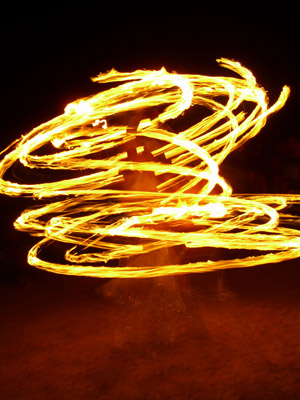 It is commonly thought that flames occur because "there is very little proper policing done on the Internet" but I believe this to be false. Instead, I believe that it is the consequence of the medium primarily existing as text.

In fact, what you'll observe if you study individual flames is that they typically start as an escalation of emotion, only spiraling later into passionate and personal arguments. The only way to stop flames from destroying a community is to break this cycle.

So I've taught all my staffers over the years my ideas on what causes the cycle of flames, and how to avoid them. One particular piece of advice that I give is in regards to how emotions are amplified in the online text medium.

This happens for several different reasons:

Since text is lacking tonal and visual context, we have a tendency to over-interpret any emotional content that does exist (link to paper). In fact, we may have no better than a random chance of correctly interpreting the emotional tone of ironic vs sincere text in a message (link to Epley/Kruger paper).

In addition, we tend to respond to someone's emotional state by expressions of similar intensity (this phenomenon is known as Emotional Contagion). And the higher the level of intensity of our emotions, the less our ability to be empathetic (link to paper).

These tendencies lead into a vicious feedback cycle.

Thus I now find that now there are certain words and phrases that I avoid using when responding to people online. I have to be very careful with irony and sarcasm, and when I use them I include symbols such as smilies to such give the emotional context that is missing from the text. I find that even the slightest hint of blame will be over-interpreted. I avoid the words "should" and "didn't", never tell someone that they forgot something, etc.

My online community staffers have found understanding this cycle an important tool in moderating the communities they lead.

(This is a update/rewrite of what I originally wrote  in Dave Winer's UserLand discussion group back in September of 2000).