We live in a world of conversation, of language; all full of words. Mastery of language requires learning the meanings of thousands of words. The average native English language speaker uses in the realm of 12,000 to 20,000 words, whereas a college graduate would use 20-25,000 words. Shakespeare actively used more then 30,000 words, and his vocabulary was estimated to be over 66,000 words. Yet there are, at the very least, a quarter of a million distinct English words, excluding inflections, and words from technical and regional vocabularies. The Oxford English dictionary defines more then 600,000 words.

But mastery of words is not enough to allow effective conversation.

That is because words themselves don't have meaning; the meaning is provided by the people who use them. Meaning is in the mind, not in the words.

Words also require context, outside of which they may have different meanings. For instance, consider the word "trust". To a banker or CPA "trust" is a property held by someone to manage for someone else's benefit. To a cryptographer it is the confidence in a future outcome based on probabilistic mathematics and past experience. Finally, to the lay person "trust" is about honesty. "Spin" is another example of a word that changes with context; to a weaver it is the production of thread, to a physicist it is a property of elemental particles, to an athlete it is a type of exercise class, and to a politician or public relations professional it is a way to tell a story to sway pubic opinion. 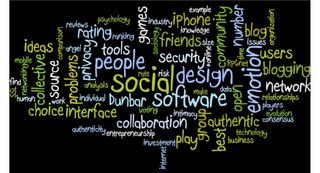 Every time a new group of people meet together — whether in a team, in a marketplace, or in a community — one of the first activities they must do together is create a shared language. They do this in order to communicate more effectively together, to put a context on the words that they have in common, to construct a shared understanding in their minds based both on available information and their individual diversity of experience.

Don't forget that the linguistic root of communication is the Latin verb commūnĭco  — which doesn't mean "to communicate" but instead means "to share something with someone, to take or receive a part of, to partake, to participate in". Thus the creation of a shared language takes us to the roots of communication.

Yet the art of creating a shared language together is not taught. Some individuals and groups do it intuitively while others will just let it evolve naturally over time. However, some facilitators have learned that one of the best ways to help a group form a shared language is by having the group create together a shared artifact.

A shared artifact is the creation of an object or shared space that is created collaboratively. It allows the individuals participating to ask the questions: "Is this what you mean when you are talking about this? I use these words, so suppose we change it to this? Is that what you mean? Does this reflect our new shared understanding?"

Examples of shared artifacts include Watson & Crick's Tinker-Toy DNA model. Each scientist would work on the model separately, then use grad students to carry the model around to his partner to express certain ideas. Both Compaq Computer and Southwest Airlines were reportedly established after their founders wrote their ideas down together on a table napkin, another shared artifact.

A shared artifact is also useful because flooding someone with information and terms gives no assurance that the recipient has gained knowledge of the subject. Instead, the act of creation confirms to both parties that the knowledge was successfully assimilated.

Another advantage to creating a shared artifact is that it isolates any problems to the task at hand. Often there are differences in status, purpose, or perspective that can get in the way of group formation, but a focus on a common task of the creation of a neutral shared artifact allows those issues to come later as the participants develop the trust and shared language required to talk about those tough issues.

The best facilitators know what kinds of shared artifacts work best for different groups under different circumstances. Sometimes a shared artifact is just a model of a process drawn on a white wall. Often it is a creation of a mission statement or joint objectives. I personally like taking old mind maps and trying to recreate them anew with more recent knowledge.

The Future of Shared Language

The nature of shared language is changing in the 21st century. The conjoined social networks in the blogosphere — via Facebook, Twitter, or the attendee-focused Unconference — cause new terminology and new language to form ever faster. I've personally seen words like "retweet" and "attribution" gain important contextual meaning within my social networks. As with any shared language, newcomers have difficulty discovering their meanings only by osmosis.

Tagging is another means by which shared language is rapidly expanding. Certain words are gaining context through common use at Delicious.com, Technorati, Flickr, and other tag-enabled web sites.

To a certain extent, all of these new shared languages are built upon shared artifacts. Twitter, Facebook, Delicious.com and others sites each create constraints on how language is shared and with whom. However, there is little purposeful social design being applied to these new shared languages. Though there may be shared artifacts, they are not purposefully facilitated.

Will these increasingly organic shared languages prove better than more purposefully created ones or worse? Is social language facilitation the next big thing in social network? Or is there just not enough space for it within the tightly constrained social artifacts of the internet? These are questions that we as social software technologists need to address as the future of the internet increasingly becomes the present of our social groupings.

(I learned the concept of Shared Language in 1990 from Michael Schrage's book Shared Minds: The New Technologies of Collaboration. It is out of print, but there is a new edition retitled No More Teams!: Mastering the Dynamics of Creative Collaboration. The use of a modeling language to facilitate group formation I learned from Matt Taylor (@worthyprojects) of MG Taylor Corporation, though the use of the term shared artifacts and approach is my own. I make passing reference to the early stages of team formation ("trust building", "goal clarification", "commitment") which come from the Drexler/Sibbet Team Peformance Model. The poem is by excerpt of a larger work by John Campion and is reprinted with permission — the work reflects the poet's Ecotropic concerns and are part of his third book-length poem Medusa. Look at the work under the Medusa Project link. The table napkin photo is from an excellent post on The Idea Napkin by Morry Potoka and is also reprinted with permission. The Watson-Crick photo is public domain, and the Life With Alacrity graphic was produced using Wordle.)