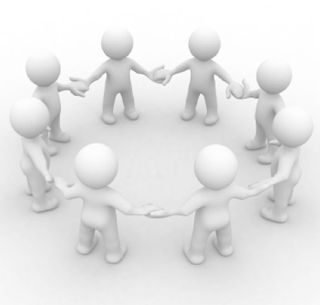 As part of being a member of the sustainable MBA community at Pinchot University, I have been trying to articulate what I like about the kinds of collaboration that are possible even inside a competitive industry. In our MBA program, we don't just teach about competitive strategy (using classic's like Porter's book), but we also teach about the nature of coopetition. These practices are more likely to lead to sustainable businesses (not only sustainable=green, but sustainable=enduring).

I have been a participant during several periods of technology history where coopetition has been practiced, most recently during the early days of the Twitter ecosystem. I can distinctly remember two companies offering competitive Twitter clients sharing best practices at the iOSDevCamp hackathon I hosted. Unfortunately these practices ended when Twitter pulled the rug out from independent developers by controlling the API keys under the guise of Delivering a Consistent Twitter Experience (post now only visible on Internet Archive). There are some that argue that Twitter may have ultimately killed its ecosystem in pursuit of short-term profits over a long-term community of innovators. We have seen this take over elsewhere as described in How Ecosystems Became the New Walled Gardens.

So what makes a great participatory ecosystem? My recent work in trying to understand Elinor Ostrom's design principles for the collective governance of the commons and some other thoughts have led me to this definition:

A participatory ecosystem is a business ecosystem with relatively low barriers to economic participation, artistic and professional expression, and civic engagement by all stakeholders, including producers and consumers.

It has strong support for creating, sharing and increasing the production of goods and services of value to the ecosystem. A participatory ecosystem will have system processes where established stakeholders are incentivized to share knowledge, access to markets, and capital to new stakeholders in the ecosystem, and to turn consumers into producers.

Stakeholders with leadership positions in a participatory ecosystem may change over time, but the function of an ecosystem leader is valued by the community because it enables members to move toward shared visions, grow the market, to align their investments, and to find mutually supportive roles in the ecosystem.

A participatory system is resilient, and has system processes, such as decentralization, to prevent bad actors. Every stakeholder in a participatory ecosystem believes that their goods and services matter, and feel some degree of social connection and community with one another (at least they care what other people think about what they produce.) Not every stakeholder must produce, but all must believe that they are free to produce when ready and what they contribute will be appropriately valued.

This is not completely an original idea — it is of a mashup of Henry Jenkins’ “participatory culture” definition with James Moore’s “business ecosystem” ideas. I've added a few things I've observed about working participatory ecosystems, and have also run this definition by a number of my colleagues in a variety of industries for small tweaks.

Most recently I've been using it in talks about the blockchain ecosystem. I have recently joined Blockstream where I am leading a number of strategic initiatives, including the company’s participation in cross-industry collaborations, as well as future technical efforts with international standards organizations such as W3C, IETF, and Oasis. In these efforts I have been sharing this definition more broadly, and it seems to be resonating with the community, in particular as the blockchain community cares deeply about decentralization.

I've posted this definition to Github hoping that others can fork it and submit pull requests to make it better — just like how open source world works!